Nor’easter To Hit Parts Of East Coast With Snow

A big winter storm is on the horizon for our coastal areas in the North East. It got me thinking, what exactly is a “nor’easter?” According to The Weather Channel, “a nor’easter is a strong area of low pressure along the East Coast of the United States that typically features winds from the northeast off of the Atlantic Ocean – hence the term “nor’easter.”

These storms typically feature winds from the northeast off of the Atlantic Ocean and are most often associated with Northeast winter storms, but snow is not a requirement. 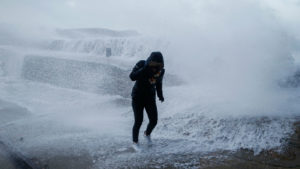 * Nor’easters can happen any time of the year but are most frequent and strongest from September through April.

* Nor’easters usually develop between Georgia and New Jersey within 100 miles east or west of the East Coast. In general, they move northeastward and reach maximum intensity near New England or Canada’s Maritime Provinces.

* A nor’easter may bring heavy rain or snow, strong winds, coastal flooding and rough seas to the affected areas.

The heavily populated Interstate 95 Northeast Megalopolis, including Boston, New York City, Philadelphia and Washington D.C., is especially vulnerable to this type of storm due to the proximity to the coast.

So does this mean I should run out and get bread and milk?

From TWC: If a nor’easter threatens your town, be sure to take the proper steps to prepare. This includes stocking up with at least three days of food, water and other necessary provisions, as you may be left without power for multiple days due to strong winds potentially knocking down trees and power lines.

If roads become snow-covered or flooded, stay off them until they are plowed or flooding subsides. It is best to stay home until the storm passes. Conditions can change quickly and you don’t want to be stranded on an unsafe road unable to get home.