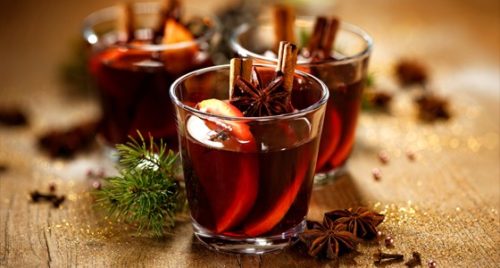 By Barbara Hay~
During the holidays, there’s a chill in the air and the recent light snowfall begs for warming comfort drinks and treats …perhaps a mulled cider or mulled wine? Imagine, a steaming cup curled up on the sofa with a comforter and a roaring fire… it sounds wonderful. So tis the season for mulling. 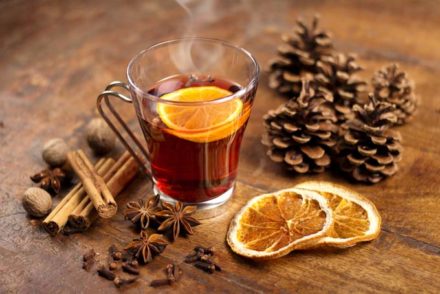 The word “mulled” simply means heated and spiced. Many liquids can be mulled – mead, cider, and of course wine. Mulled wine is a traditional favorite in cooler (cold) climes, and pairs swimmingly with holiday celebrations this time of year.

In medieval times Mulled wines were called Ypocras or Hipocris, after the physician Hippocrates. They were considered healthful and able to prevent disease. Being these heated drinks also contained alcohol which made them more sanitary than water, they probably did keep people healthier all cold winter long.

In the 1500s, cookbooks listed methods of mulling Claret. Recipes involved honey, cinnamon, cardamon, galingale and of course French (Bordeaux) wine. During the Victorian era a particular mulled wine recipe just for children was developed. Named after Colonel Francis Negus, who created it, “Negus”— a mulled wine consisting of Port, sugar, lemon, and spices—was served during the Christmas holidays and often at children’s’ birthday parties.

Today, mulled wine is a staple at many holiday parties and they are as varied as sangria recipes. There are different styles in every part of the world – some favor using white wine, others red. Some add in only a few spices, while others pour in oranges, cloves, twelve spices and more fruit for color! Your mulled drink is limited only by your own imagination!

Mulled wine was also served in the movie It’s a Wonderful Life. The family enjoys the thought of wine bringing love and joy to those who drink it. Clarence, the angel, is also a fan. Apparently, the Heavenly Host enjoyed wine. When he’s in the “Evil” bar, he asks for a glass of mulled wine that is “heavy on the cinnamon, easy on the cloves.”

So we’re in good company.
How to make mulled wine

A basic modern, yet traditional, Mulled wine recipe is as follows: 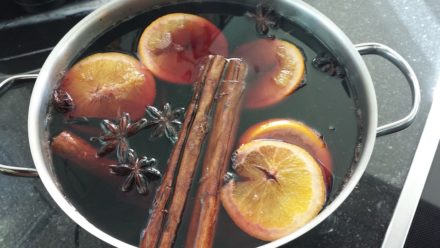 Water (optional softener instead of tea)

Cut lemons and oranges into slices. Pour the red wine into a saucepan and gradually heat. Add fruit slices, nutmeg, cloves and brandy. Keep an eye on the mixture and wait until it becomes hot to the touch. You can also pre-mix the ingredients and microwave it by the glass/mug full is just as easy. At this point, you could blend in sugar or water (if desired). Pour into glasses/mugs and add tea (to taste.) Garnish with a cinnamon stick and candy cane.

If you want to try a mulled drink that is alcohol-free, traditional Mulled cider will do the trick. Here’s our basic recipe: