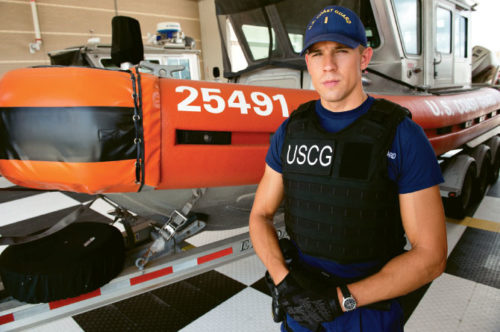 SANDY HOOK – Lt. jg Alexander Kloo, a 2011 graduate of MAST, the Marine Academy of Science and Technology, was featured in the December issue of Seapower magazine, writing about his experience in law enforcement and port security during Hurricane Harvey in Galveston, Texas. The Coast Guard officer credits his education at MAST and his training there in its Navy Junior Reserve Officers Training Corps as his impetus for studying at and graduating in 2015 from the Coast Guard Academy in New London, Ct.

The monthly publication is issued by the Navy League of the United States, a national association with nearly 50,000 members who advocate for a strong, credible US Navy, Marine Corps, Coast Guard and Merchant Marine. The magazine focuses on maritime defense news.

Kloo, now an Enforcement Division Officer at US Coast Guard Sector Houston-Galveston, noted in the article, “my school (MAST) has a tendency to send a high number of graduates to the service academies.”  Writing about the devastating hurricane that made landfall in late August, Kloo referred to his role in rescue operations as “the defining moment of my time… It was quite a remarkable situation and we did our best to prepare for it. When it first hit, rain arrived in the middle of the night and full-blown pandemonium erupted. We were getting in upwards of 1,000 calls per hour at our sector as our command number had been posted all over social media because the 911 operator number was down. “

Kloo noted every available person was answering the phones, and matters were complicated when the station lost all non-Internet communication and only had one single radio channel they could use along with their own cell phones. The Coast Guardsmen resolved the communications problems using text messaging, Instagram and “pinning” locations on Google maps. As a result, “we were able to save so many lives during the storm, due to the ongoing recapitalization efforts the service is doing. Our sector’s small boats fared extremely well throughout the storm and the only way we were able to do what we could do during the storm was because of our facilities and the upgrades we’ve gotten over the years. “

Kloo noted that although the diversity of Coast Guard missions is so vast on a daily basis, “we do the best we can to help save lives and protect the community.”

“Lt. jg Kloo is an awesome representative of MAST,” said CDR Tracie Smith-Yeoman, US Navy (Retired), Senior Naval Science Instructor in MAST’s NJROTC program. “He certainly embodies the core values of the NJROTC program – Honor, Courage, and Commitment. The goal of our program is not to recruit people to serve in the military, though a large number of our graduates do go on to serve, but to prepare our students to become good citizens and leaders. Alex certainly is both of those!”

“MAST’s NJROTC program is one of the top programs in the nation, and a major draw for students from all over Monmouth County, and beyond,” said Earl Moore, MAST Principal since August 2014. “I did not have the pleasure of knowing Mr. Kloo, but I’m sure MAST’s goal for him then was the same as it is today for every student at MAST – to prepare them academically for college and careers, and to cultivate and instill in them the value of service in general, not just military service. Fortunately for us all, many students that graduate from MAST go on to contribute to society and serve their country in varied and untold ways. Mr. Kloo is a perfect example.”

MAST is the oldest of the five career academies in the Monmouth County district and was established in 1981. The district accepts students for the four-year high school without discrimination on the basis of race, creed, color, orientation, religion, disability or socioeconomic status. Students are required to be active members of the Navy Junior ROTC program during their high school years, though there is no recruitment nor requirement for military service after graduation.  https://mast.ctemc.org/