How Many Calories Are In A Glass Of Wine? 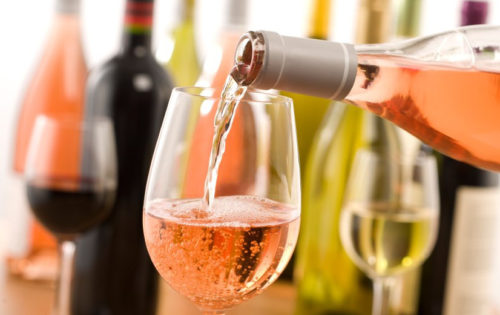 With New Year’s Eve upon us, you may be wondering just how many calories are in this glass of wine.

A glass or two of wine can be good for your health, particularly if it’s red wine. According to The World’s Healthiest Foods, Resveratrol, a flavonoid found in red wine, is something of a health superhero. Resveratrol has heart-protective effects, can reduce the risk of stroke and can inhibit the formation of tumors. White wine’s benefits are slightly more modest, but there is some scientific research showing it can raise levels of HDL, the healthy, good cholesterol.

When dieting, the first thing many people eliminate is their wine to conserve calories. But do you really know how many calories are in your glass? Do you know which wines have fewer calories? Here’s a hint: with fewer calories are generally wines that are lower in alcohol content.  There are quite a few great quality low-calorie wines. The trick to finding these wines is understanding a basic concept about agriculture: the cooler the climate, the less sweet the grapes are when ripe. This explains why a Malbec from France tastes so different than one from Mendoza, Argentina.

The lowest alcohol dry wines range from 9-12% alcohol by volume (ABV). There are wines with less alcohol—such as Moscato d’Asti at 5.5% ABV—but you’ll find they are much sweeter tasting.

Another consideration is residual sugar. Residual sugar is grape sugar that does not convert to alcohol during fermentation. Some dry wines, like a big, high-alcohol Cabernet Sauvignon, can have more residual sugar than a sweeter wine with low alcohol like a German Kabinett Riesling. That’s because the residual sugar is a less-concentrated source of carbohydrate than alcohol, at four calories per gram.

Wine can cause weight gain because it is a concentrated source of calories, even if it feels light to the taste. Think about it, alcohol weighs in at a hefty seven calories per gram, which is only two calories fewer than pure fat! 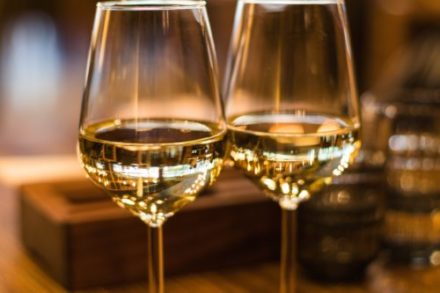 A 100 calorie, five-ounce glass of wine per day may seem harmless, but it can add an extra 1,700 calories over a two and a half week period, which is equivalent to about a half-pound of body fat. That’s about 10 pounds of body fat, per year!

If you’re looking to limit calorie intake, focus on the alcohol content of wine, as this is the most significant determinant of its calorific content.

There are many ways to determine how many calories are in the glass, but the simplest and easiest formula to use is:

For example, dry wine is any wine with less than one percent residual sugar (RS)—generally, around 0-6 sugar calories, this includes wines labeled  Sec, Secco and Sekt.

To estimate the calorie content multiply the number of ounces in the glass times the alcohol content (% by volume) and then multiply by the factor of 1.6. The formula is: Ounces of wine x ABV% x 1.6 = calories.
Let’s pour five ounces of white burgundy. It has 13% alcohol by volume. The calories would be approximately: 5 oz. X 13% ABV x 1.6 factor = 104 calories.

Off-dry wines are typically defined as being between 1 and 4% residual sugar, with 2.5% considered the average. Most off-dry wines (which can also be labeled as Demi Sec, Semisecco, and Abboccato) contain 10-30 sugar calories. For off-dry wines, the factor multiplier becomes 4 based on the sugar calories per ounce. (Ounces of wine X ABV% X 4 = calories ) So, five ounces of a German Spätlese with an ABV of  8% alcohol by volume would have approximately 160 calories. 5 oz x 8% x 4 = 160 calories.

Sweet dessert and fortified wines sometimes will include Doux, Dolce, Amabile, Dulce on the label. These sweeter wines generally have anywhere between 30 and 72 sugar calories. Many late-harvest wines are considerably higher in sugar and lower in alcohol content, while fortified wine is high in alcohol AND sugar content. The approach is the same, except the factor multiplier is now 10. (Ounces of wine X ABV% x 10 = calories ) we usually only consume one to two ounces of a dessert or fortified wine in a serving. For example, two ounces of a Ruby Port at 18% ABV would be approximately 360 calories using the following formula of 2 oz x 18% x 10 = 360 calories. It’s also good to remember that a fortified wine like a dry Manzanilla Sherry will be high in calories, but as it is often consumed in smaller volumes (2 ounces as opposed to four or five ounces), the calories consumed could end up being fewer than a lower alcohol, unfortified wine.

Champagne lovers rejoice! Champagne can be a good choice for limiting calorie intake because it is often relatively low in alcohol compared to other dry whites – albeit residual sugar levels would also be a factor. Generally, cooler-climate whites will also have lower alcohol levels and therefore fewer calories per glass. Look for the term “Brut Nature” on the label. “Brut Nature” is a style of sparkling wine that doesn’t have any added sweetness.

So if you’re counting calories, remember a dry wine may not always be the best choice for a low-calorie option: a sweeter low alcohol wine could be lower in calories.