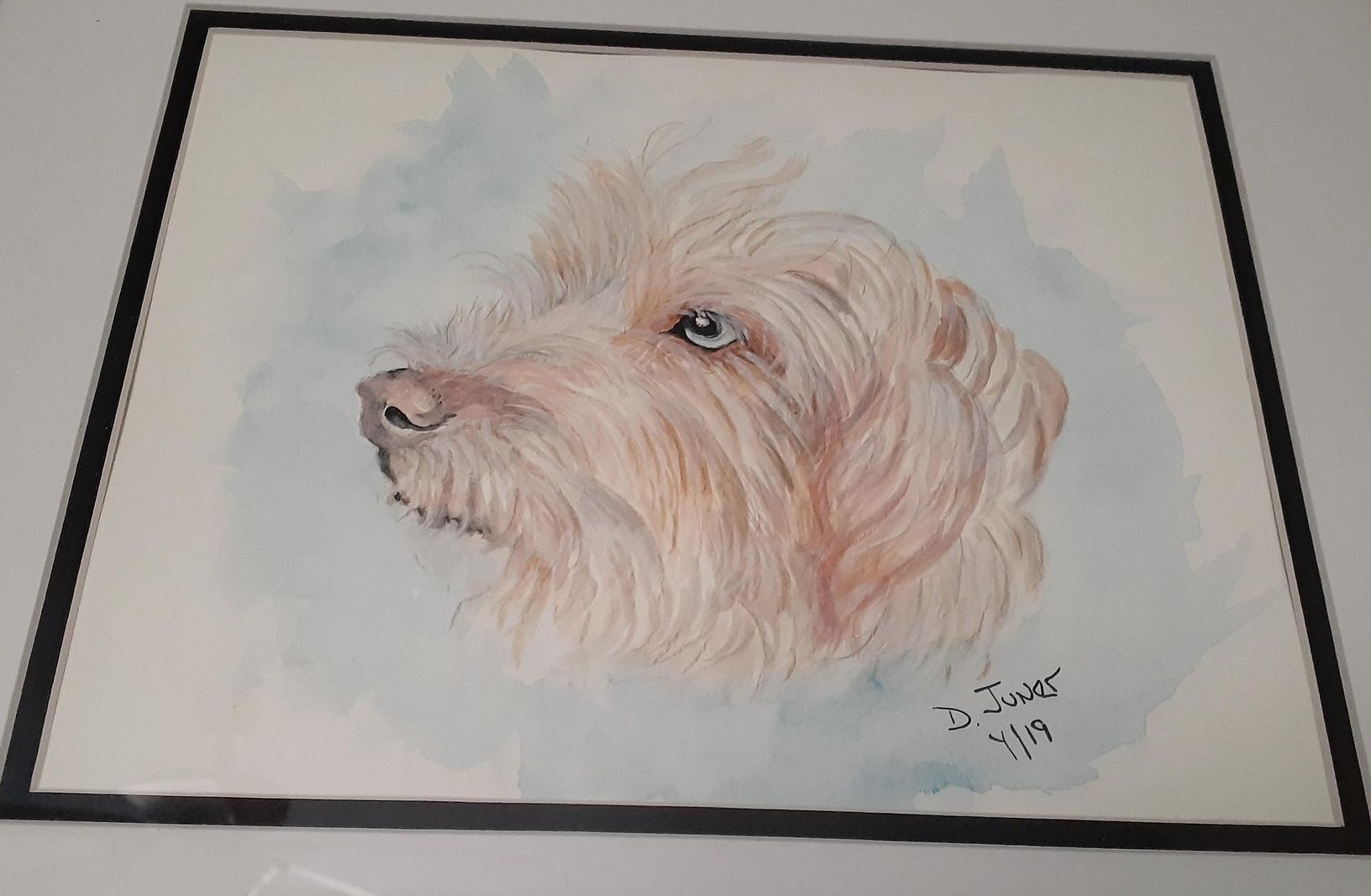 Don’t you just love bumping into interesting, talented people when you least expect it? I sure do! We love venturing out for live music, especially when it is one of our favorite talents and it’s always a plus when sitting waterside! What could be better than good live tunes, adult beverages, a view of the water while meeting new and interesting people?

On one of our jaunts to Baker’s Waterside Grill, Toms River, we happened to sit next to a friendly couple. A brief smile, hello and suggestions of the best apps led to more in-depth conversations. David and Sharon meet Donna and Jim! Upon the next several visits to the Grill, we again met up. On one of these chats, I learned that Donna was/is a fantastic artist!

Although living in the Toms River area, Donna didn’t grow up locally. She hails from Mamaroneck, NY on the Long Island Sound. She and her husband Jim moved to the Island Heights area in 1990. A mom of five children, Donna had placed much of her painting on hold while raising the kids. She dabbled in various Christmas pieces and folk art creations during the early rearing days. With husband Jim in the carpentry business, Donna had access to assorted scrap woods, scroll and band saws which resulted in the creation of many a hand-painted Halloween and Christmas item.

Never a formal art or drawing class, but Donna notes a love of drawing as early as four years of age. She attributes her drawing which really kicked in at age 8-9 to her dad, an avid sailor. His many sailboat magazines inspired her to draw the boats she saw on the pages. At one point Donna says she was intrigued and drawn towards marine architecture feeling she could further design and make better use of the limited space below deck. She would redesign layouts for storage space, much needed on any boat. Chuckling, she later says she had different thoughts after realizing a lot of math goes into such endeavors-math not being her strong suit!

A self-taught artist, Donna mentions one of her two sisters shares her artistic abilities as well as a daughter who also has the artistic juices flowing. Donna jokes, claiming that she’s got no clue what she is doing, but that most times her paintings turn out the way she’d hoped! 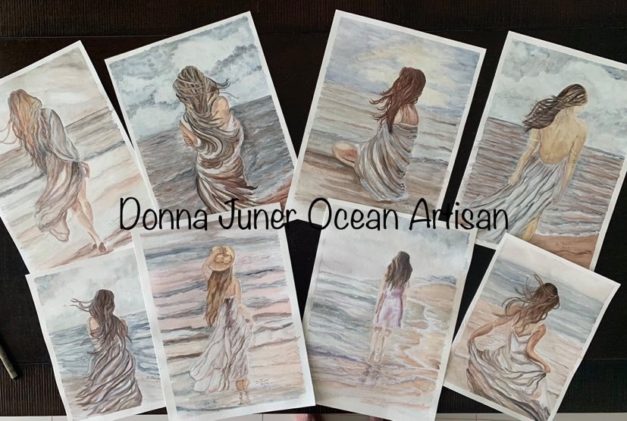 Donna and Jim suffered a traumatic loss with the unexpected death this past year of their son who also shared an artistic flare for both drawing and glassblowing. This tragic loss turned Donna away from her love of painting for a time as her son Dylan was one of her biggest fans. Painting for Donna just wasn’t the same without his feedback and praise. Thankfully, realizing he would be watching and wanting her to continue, Donna began to take brush to hand and pick up where she left off. Relaxation, peace and satisfaction are the benefits, although she says often she is her own worst critic.

Mornings are the favorite time to paint for Donna with the majority of paintings created during the winter while snowbirding in the Dominican Republic. She does paint when home but finds more time when in the islands. She finds lots of inspiration at home in Island Heights which is bordered by the Toms River and Barnegat Bay. Inspiration is constant when surrounded by many nearby marinas, sailboat races and beaches less than 10 minutes away! 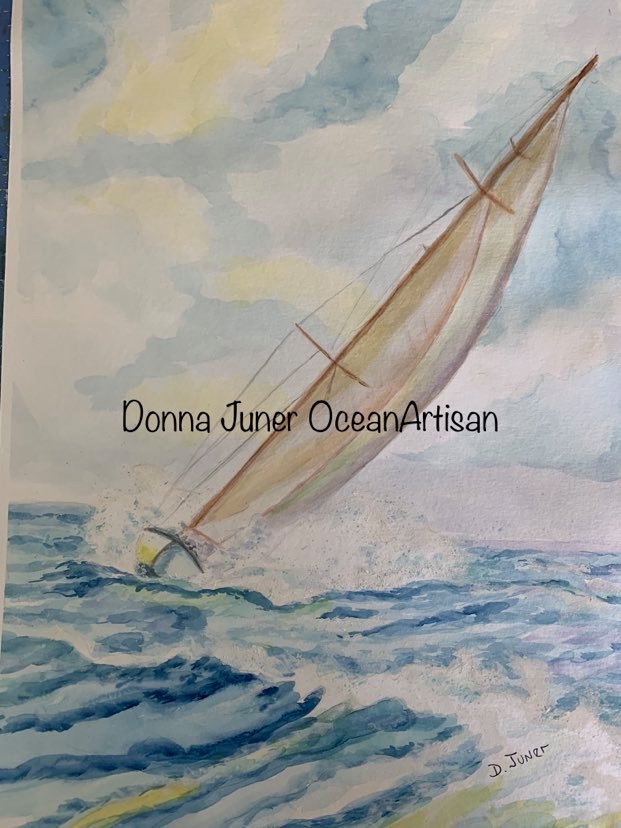 Something kids only dream about, was Donna’s childhood reality! Her mom was head of the Bronx Zoo Public Relations! Growing up she delighted in spending lots of time around the animals. Her love of large animals, big cats and elephants, as well as the exotic birds were subjects to sketch and paint. Donna also loves painting botanicals and says a fun aspect of artwork is choosing the subject matter of that moment. The morning paintings result from her evening sketches.  Although Donna admits she’s got a great art room at home, like many of us, the dining room table has become the favorite workspace, mostly due to the preferred lighting….not to mention the ocean in the backdrop!

Watercolor is Donna’s favorite medium but says she also enjoys pastel and playing around with acrylics. As in her early days, her favorite subject matter continues to be anything water-related. Her love of the ocean, waves, beaches and sailboats is seen in most all work. With no real preference in paints, Donna is into nupastels and Prismacolor pencils. Some pieces have been completed on canvas or wood, but the bulk of her creations are on watercolor paper. She claims she’s got no favorite style or preferred artist, however she enjoys some of Winslow Homers’ work. 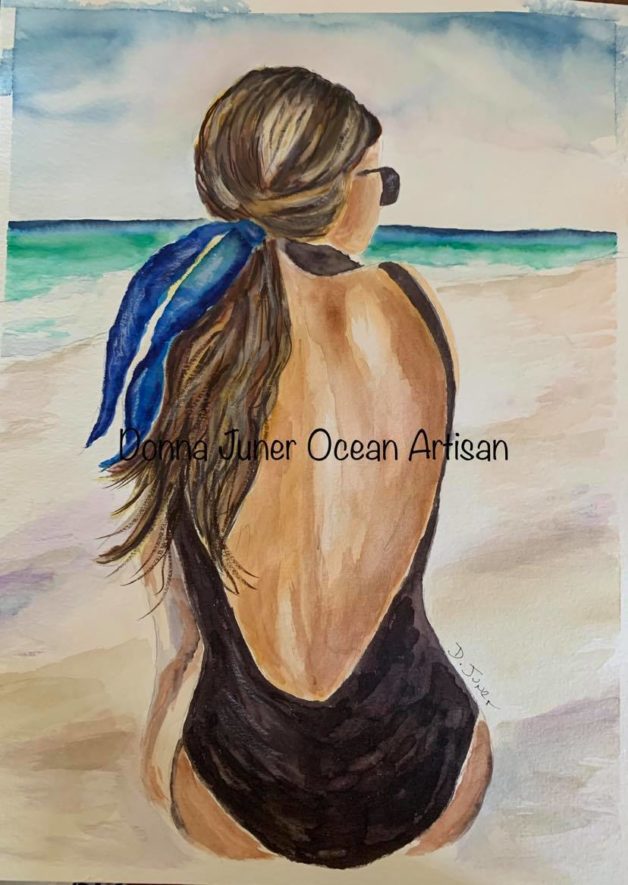 Donna does sell her artwork but isn’t into too much commission work. She’s done many pet portraits from photos provided by owners primarily limiting the work size to a max of 16” X 20”. I am the proud owner of a portrait of my ‘lil rescue, Quincy shown on the cover pic. These are on watercolor paper with most being 8” X 10” or 11” X 14” as they are easier to transport when traveling. A few larger pieces are on canvas or wood in pastel or acrylic.

She’s got repeat customers, painting many boats on commission.

At the moment Donna hasn’t a website. Her Etsy is on hold as she’s been out of the country making orders impossible to fill. In addition to painting, Donna does bookkeeping P/T for her husband’s carpentry business as well as enjoying and tending to her home landscaping. She does ship her work within the US.