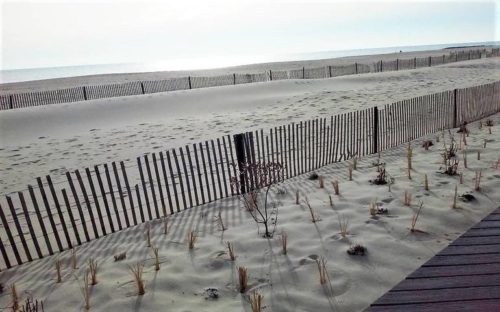 Tucked along the east side of Belmar’s boardwalk at Fourth Avenue is its newest “dune garden,” adding to the growing beachscape barrier designed to help protect the oceanfront from powerful storms.

Stretching from Fourth to Fifth Avenues, the 1,500-square foot area includes various types of dune grass, native and other suitable plants, and “pollinators” to attract butterflies to the beachfront, which lost its last protective dunes during Superstorm Sandy more than six years ago.

The new dune planting is situated just south of the strip of sand along the boardwalk, where the rare seabeach amaranth plant was recently discovered by environmental officials, and eight blocks away from the borough’s first successful dune planting, which took root in November 2017 near the 12th Avenue beach playground. 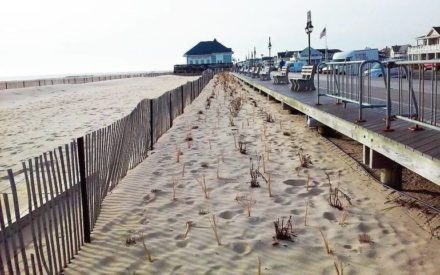 In the effort led by Belmar Council President Thomas Brennan, the borough once again partnered with The Little Plant Co. owner Jason Austin in selecting the plants with the actual planting this time being undertaken last month by the Department of Public Works.

“The success of the 12th Avenue planting was great momentum and positive reinforcement going into this year’s new planting,” said Austin, whose Pine-Beach company is a recognized leader in creating landscapes that have a positive impact on the environment. “This is critical in creating unfragmented dune ecologies that provide opportunity for the piping plover and the beach amaranth to find their niche.”

In its visit last fall to Belmar, N.J. Department of Environmental Protection and the U.S. Fish and Wildlife Service representatives also informed borough officials that piping plovers have returned to nest in the natural beach area near First Avenue. Both the small shorebird and the seabeach amaranth are federally endangered species that cannot be disturbed under environmental protection regulations.