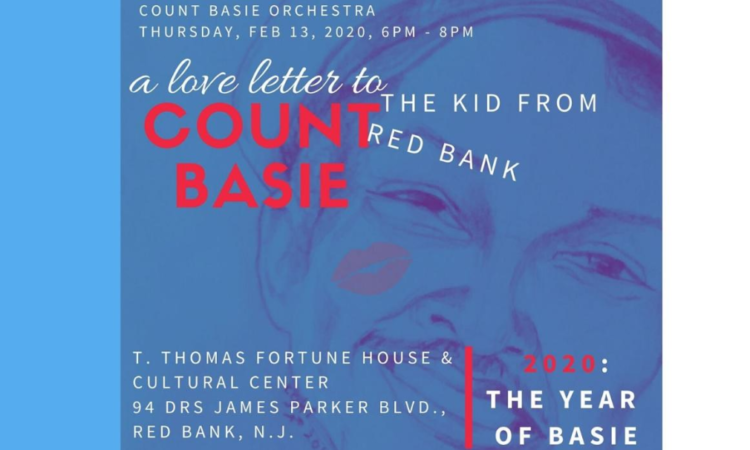 The T. Thomas Fortune Cultural Center Salutes Black History Month and announces, “2020: The Year of Basie,” in honor of the 85th Anniversary of the Count Basie Orchestra that is still playing to sold-out audiences.  The Cultural Center will honor William James “Count” Basie, with a pre-Valentine’s Day reception, on February 13, from 6-8 pm with the reading of letters from “A Love Letter to Count Basie: The Kid from Red Bank.” Basie used his music to break through racial barriers, during a time when segregation was the law of the land.  When it comes to jazz, Basie’s incomparable legacy as a trailblazer is that he launched the careers of many jazz greats.

The Cultural Center is inviting businesses and organizations to participate in this town-wide campaign to amplify Basie’s name – the first African American male to win a Grammy Award in 1958 and 1959.  Find out how your business and organization can be a part of this year-long event. 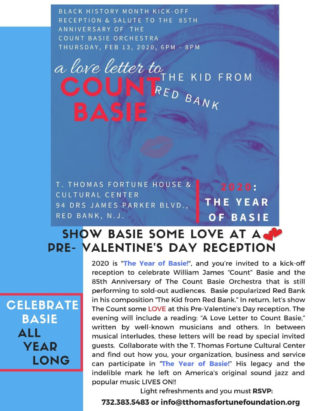 “We’re excited about The Year of Basie,” said Gilda Rogers, Vice-President of the T. Thomas Fortune Foundation. “We’ve already received a thumbs up from The Count Basie Performing Arts Center, Detour Gallery, The Community YMCA, and Two River Theater, to be a part of the campaign.”  You can expect to see exhibits, jazz events, giveaways and for restaurants, a cocktail named “Down for the Count,” along with a map that will point out different locations throughout the town that in some way are connected to Count Basie. The T. Thomas Fortune Cultural Center hopes to involve many other establishments in this year-long celebration.

“A Love Letter to Count Basie” is a beautiful way for Red Bank, Basie’s hometown, to show The Count, some LOVE (b. 1904-d. 1984).  The letters will be read by specially invited guests, in between musical performances courtesy of the Jazz Arts Project.  The letters will become a part of a Count Basie exhibit that will open at the Cultural Center later in the year.

Also included in the line-up for the evening is Wayne Winborne, executive director of The Institute of Jazz Studies (IJS) at Rutgers University/Newark. IJS is now home to the Count Basie collection of nearly 1,000 artifacts that belonged to the late jazz icon.  Some of his artifacts will be coming home to Red Bank later in the year when the Cultural Center opens the Basie exhibit, courtesy of the IJS.

Basie was inspired by Red Bank to play the piano and to be a great entertainer, and he did not disappoint his hometown.  Known for being one of the “hippest” towns around, Red Bank must give Basie some credit for putting Red Bank on the map, and popularizing jazz – America’s Original Sound. “A swinging concept,” according to Basie – The King of Swing.